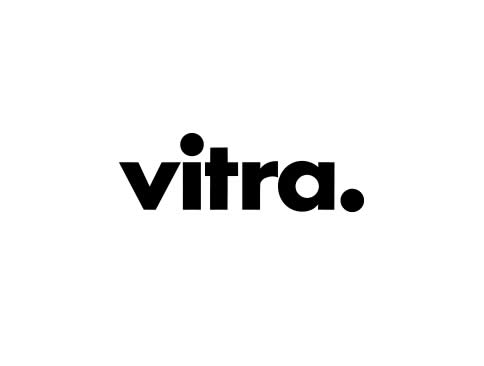 Vitra is a Swiss company dedicated to improving the quality of homes, offices and public spaces through the power of design, founded in Weil am Rhein in 1950 by Willi Fehlbaum, owner of a furniture store in nearby Basel. Its products are developed in an impeccable, intensive design process, which brings together engineering excellence with the creative genius of internationally renowned designers. The goal, since the early 1950s, is to create functional and stimulating interiors, furniture and accessories through some guiding principles such as longevity of materials, impeccable construction, high quality and the importance of aesthetics, as demonstrated from the great classics, many still in production since 1950.

The great American design classics were in fact the starting point of the Vitra catalog, thanks to the agreement already in 1946 with the American Herman Miller for the purchase of the rights to produce the vast collection of Charles and Ray Eames in Europe. Willi Fehlbaum was struck by the plans of the spouses Eames during a trip to America and wanted at all costs to produce them and propose them to the European market. Masterpieces such as the Eames Chair, the Aluminum Group, the Upholstered Lounge Chair, the Elephant Stool, the Fiberglass chairs … therefore began to be known and appreciated also in Europe thanks to Vitra. Subsequently to this production were added the works of other historical masters of international design such as George Nelson, Verner Panton, Jean Prouvé and to follow, in more recent years, the works of contemporary designers and architects such as Antonio Citterio, the Bouroullec brothers, Mario Bellini, Ron Aram, Jasper Morrison, Alberto Meda, Philippe Starck …

After a terrible fire, which devastated the entire factory in 1981, the English architect Nicholas Grimshaw was called to design the new factory, ready in just 6 months, which was joined in 1986 by another building by the Portuguese architect Alvaro Siza, starting what will become the future Vitra Campus, or the most important grouping in Europe and probably in the world of contemporary architecture in a limited space. Among the many buildings we can mention the Vitra Design Museum by Frank O. Gehry from 1989, the Tadao Conference pavilion from 1993, the Zaha Hadid Fire Station from 1993, the installation in 2003 of a petrol designed in 1953 by Jean Prouvé until the most recent VitraHaus by the architects of Basel Herzog & de Meuron in 2010, the Diogene structure of Renzo Piano in 2013 or the factory of the Japanese studio SAANA in 2013. The Vitra Campus has become in a few years destination much frequented by design enthusiasts and not only, thanks to the guided visits to the various factories, the numerous exhibitions and displays on design in its museum and to many initiatives related to the world of design and art.

Currently the Vitra catalog is divided into 2 parts. one dedicated to the home, the Home Collection, and one dedicated to contract and office, with a lot of sensitivity towards smart working. In these 2 parts the proposals of the Masters of design such as the Eames, Jean Prouvé, Verner Panton are always balanced … and the contemporary projects of designers such as the Bouroullec brothers, Hella Jongerius, Konstanto Grcic, Jasper Morrison and many others.